How-To: Upgrading the WiFi on the ASUS E45M1-I DELUXE

My media center has an excellent ASUS E45M1-I DELUXE motherboard, based on the dual-core AMD Fusion E-450 (aka “Zakate”) chip. This motherboard has a built-in AMD Radeon HD 6320 graphics chip which can render full HD content just fine. 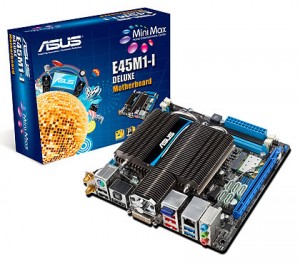 The only problem is that the WiFi card that comes with the ASUS E45M1-I DELUXE motherboard lacks support for the 5GHz band.

The ASUS E45M1-I DELUXE is a Mini ITX  (6.7×6.7 inches / 17×17 cm) card, which I’ve stashed inside an old Silvestone Sugo SG05 case to make a decent media center PC for cheap. I’ve replaced the single 12cm case fan in the front with a silent Noctua fan and used an SSD instead of a regular harddisk, all in the name of silence.

Being the DELUXE edition, it comes with an onboard wireless card, which is connected by two wires to two antenna connectors sticking out at the back of the case (by the IO shield).

It all sounds great, but there’s a problem: the WiFi card that comes with the motherboard doesn’t support the 5GHz band on my wireless home router.

Read on to find out exactly why this is a problem and how I fixed it!

If this article was helpful to you and you want to show your appreciation, please feel free to send me a tip/donation:

All donations go towards keeping the site up and running to keep helping others like yourself.

TommyNation.com © All Rights Reserved
Back to Top