A leaked slide from an Intel presentation suggests that longevity will be good if you purchase an Intel X79 motherboard today.

Intel’s upcoming Ivy Bridge-E* CPUs are based on their advanced 22nm process node. The leaked slide suggests that these CPUs will be supporting the existing LGA-2011 platform.

As Ivy Bridge-E based CPUs are rumored for a Q4 2012 release, this means that a mere BIOS update could be all that’s needed to upgrade your rig in late 2012 to the latest and greatest technology.

Next generation graphics cards utilizing the new PCI Express 3.0-bandwidth are expected (rumored) to be released from early January 2012.

* The “E” stands for Enthusiast, which are the most powerful consumer CPU series from Intel. These are not to be confused with their non-E counterparts, which cater more to people with a smaller budget or lower power demands. 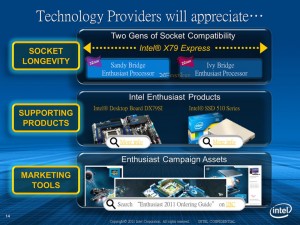 If this article was helpful to you and you want to show your appreciation, please feel free to send me a tip/donation:

All donations go towards keeping the site up and running to keep helping others like yourself.

TommyNation.com © All Rights Reserved
Back to Top